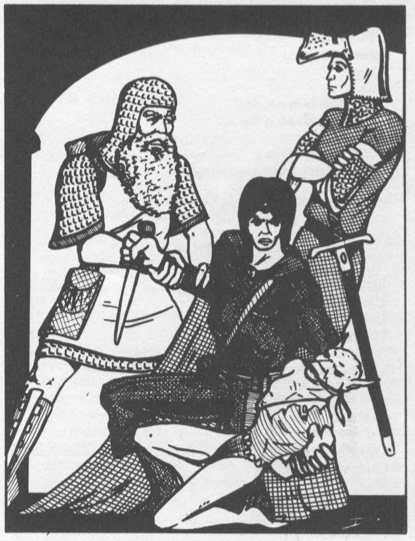 Who doesn't remember this?  Chaos guy is about to kill the prisoner while Lawful man is holding him back.

Lawful is the alignment of community and prosperity.  Order and structure, predictability, and the overall good of the group.  Men of intellect and conscience should lean toward a more holistic and selfless outlook.

Chaos is the embodiment of destruction and selfishness.  The knife wielder may be a good man.  The thing in his arms is obviously Evil and probably deserves to die.  I mean it's me or him, right?

So what about that third guy?  Mr. Neutral doesn't seem to care about what's going on - the fiend can live or die, and Lawful and Chaos can fight over it or not.  Whatever.

Why is this interesting?  Goodman Games Dungeon Crawl Classic RPG introduces Cthulhu as a Neutral deity.  Neutral?  I would imagine the consensus to be that Cthulhu is Chaotic, so saying he's neutral is a bit of a stir.  But think about it.  When did neutral become the embodiment of Balance?  It seems pretty obvious from the image above that neutrality is ambivalence.  Cthulhu isn't going to usher in an age of terror and pain to spite humanity - we're just the ants in his lawn.  Our blood-soaked demise is not personal and I would argue, not even the goal.  We are of no consequence - that is neutral.

Posted by Dithering Fool at 5:10 PM No comments: